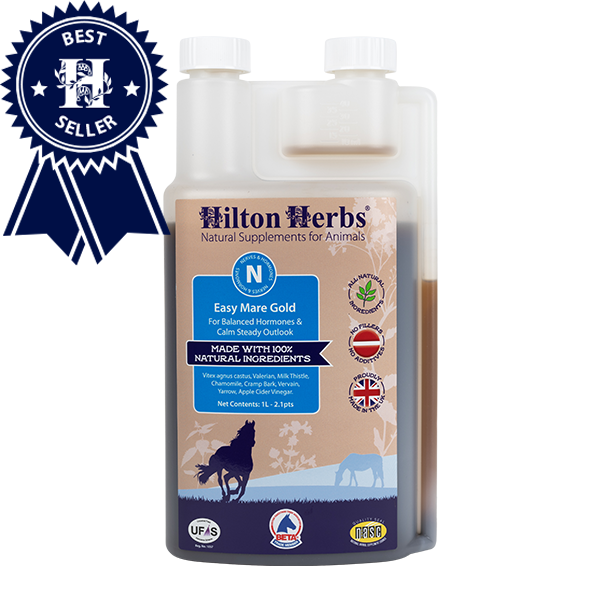 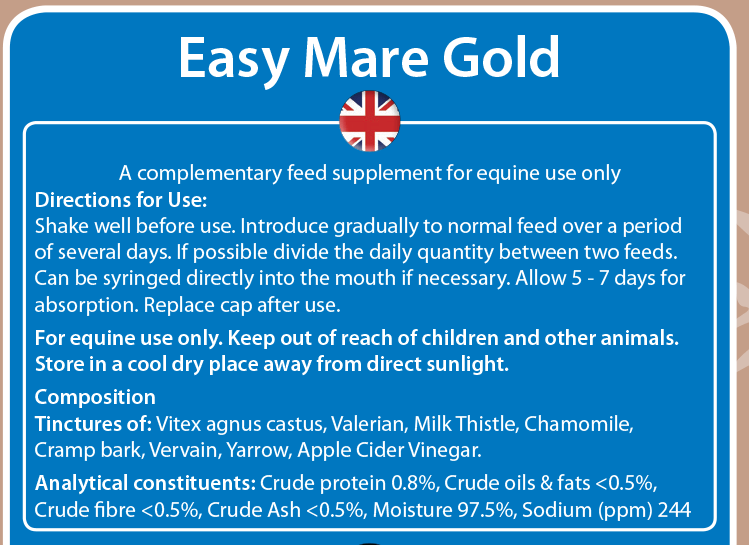 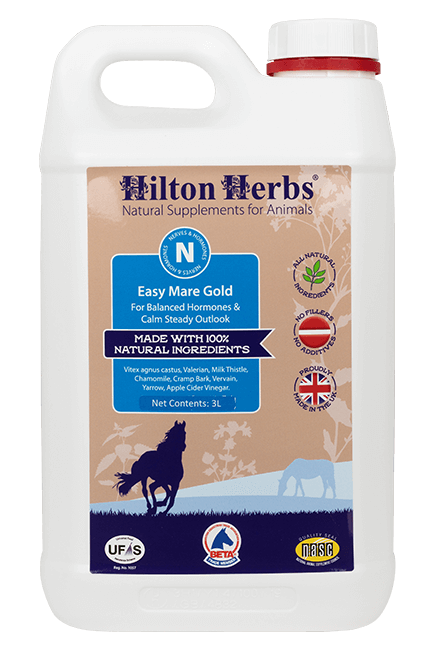 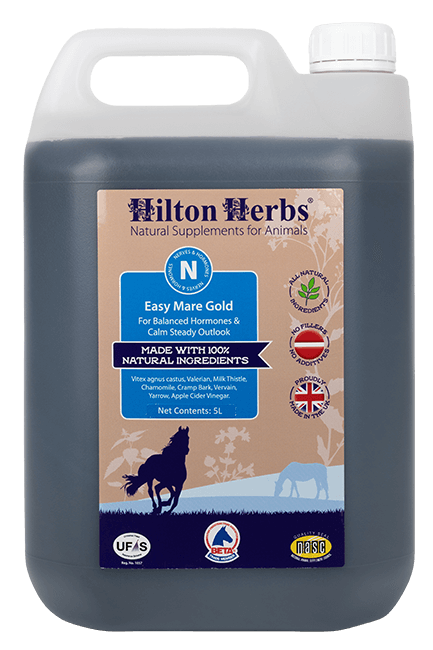 Easy Mare Gold for horses, ponies and donkeys is formulated to maintain and support:

Easy Mare Gold is a liquid supplement containing herbs such as vitex agnus castus and valerian which can help support a mare's normal 21 day cycle.  It can be useful for very young or those in poor condition, who can exhibit excessive behavioural and physical signs when they are in season.  Early spring can be a difficult time of year and yard changes such as the introduction of youngstock or new geldings can also create behavioural changes, although this can be given throughout the year if required.  After initial use, you could go onto its dry equivalent, Easy Mare (we do not suggest you give both together).

For more general support of anxious behaviour try our Calm & Collected range instead.

How to use our Liquid Herbal Supplements

One of the ingredients in this mix is a herb called Vitex agnus castus which is the seed from a Mediterranean shrub that looks exactly like a small grey/black peppercorn. This description accounts for its other names - Chaste Tree Berry or Monk's Pepper and the herb acquired this name in Medieval times when it was used in the monasteries to reduce libido in the young amorous novices!

Great product. Does what it says on the tin. I’ve tried several times to take my mare off this for purely financial reasons but always end up using it again. She is just so much more comfortable and relaxed while taking it, even using just a small amount. This product really does make all the difference to her concentration too.. highly recommend.

I have a Dales Mare who is/was very hormonal. Not nasty as she is a Dales but refused to do what was asked of her. After several veterinary procedures (and Bills) I turned to Hilton Herbs. Four year on and I have a very laid back Dales Mare. We still use Easy Mare Gold and will continue to. There is not the hedgerows or the rough pasture there used to be and our horses can not find their own natural medicines/herbs so thank you Hilton Herbs.

I have used Easy Mare over the past year had it has really helped my mare to settle down. She had an unfortunate accident which meant 6 months of box rest and she did not get stressed at all - a bit grumpy but that it to be expected i think for long term box rest!!. She loves the liquid and will drink it from the bottle!!! On another note my cat absolutely loves it when it is delivered and i give him the box to play with after :) (Helpline: The cat loved the box because of the herb Valerian)

My Arab mare got difficult to handle when a very attractive gelding came to the stable. She was not able to catch from the field and started running whenever people approached the field and all the horses where difficult to catch because of her. Her mood just got worse. When riding all the signals we gave her she wouldn't react to. Even if she wanted to run, when you said it was ok, she just changed her mind and start to go backwards. She backed down a small ditch with me on her back, and we almost fell over backwards. This scared me so I stopped riding her! I was afraid she would injur herself or me! And it even got worse. When you approached her stable or field she ran after you with her ears back and her teeth out. She was really trying to get a piece of you!! So I started her on Easy Mare and persisted in feeding her both the dried and the liquid and put her in a different herd. This and the Easy mare saved my horse!! After 3 months she was herself again!! I kept her going on Easy Mare for another 6 months and have not had any problems with her moods, since we stopped using Easy Mare! Thank you so much for a great product and for turning my Arab princess back to a princess again and not the witch she became! Susanne (Norway)

The mare I use the Easy Mare with had been having other supplements for a while, she has gone on to your product without any fuss and there has not been any imbalance to her behaviour, although I would say she seems â€˜cheekyâ€™ at the moment, not naughty or nasty, but just jolly, I would like to think she is happy!

I used this on my colt last year as he went from being a very laid back well mannered foal to a coltish mischief. This product was effective within a few days and totally banished his coltish behaviour making him a lot easier to handle, no more nipping, jumping on me while picking his feet out, boxing or strutting his stuff in front of any mares. Can highly recommend it for colts. I agree with a previous reviewer about the name of the product not really encompassing it's potential for entires. Now going to try it on a very moody handy with her back legs mare.

I have a grumpy mare , who could be going along well then will start bucking, had horses for over 20 yrs, never had one like her. After giving her the Easy Mare Gold she is calmer more relaxed, a joy to ride! Dispensing is easy and I recommend this product to anyone with a moody, grumpy mare!

Could not be happier. My mare is much more focused and happier. We are all very happy with the results of this product. She is a changed mare and so much calmer all around. Have recommended it to friends, one has started using it and is just as happy as I am.

I moved my 16hh stallion to a new large yard nearly four years ago which gave him much better grazing in a huge field which he's in on his own. Ordinarily, he's very well behaved and a perfect gentleman in every way - most people don't even realise he's a stallion until told - regardless of season. However, during the day the field is used by the mares on the yard and I had my concerns that I might be expecting a little too much from him behaviour-wise.He is still a gentleman but does become more fired up between April and October and I was concerned for his well-being and comfort. I spoke to my vet who told me there was nothing they could offer for a stallion in his situation. Knowing there are quite a few products out there for mares and already being a loyal customer of Hilton Herbs, I called the Helpline to ask for advice. They recommended (what was then) Equilibrium Gold ( Calm & Collected Gold ) I have used the product every Summer since that first year and wouldn't be without it. It doesn't change him in a hugely noticeable way, but just makes it a little more comfortable for him during the summer. And if you think this is in my head, I can tell you to the day when the season ends and to stop giving him Equilibrium because he goes from being quite forward-going to having to be pushed out on a hack. Whilst I can't say it will work for your stallion if you're in the same situation as me, I can HIGHLY RECOMMEND you try it as a non-invasive, non-chemical, inexpensive route before trying something else. The only downside? Having to give a stallion a product called "Easy Mare" which is a little odd.

My 5 year old Trakehner mare always finds it hard during her seasons, and I found it was affecting her rideability and her balance. She was having irregular cycles that were very long. 8 weeks of EasyMare and she is doing so well. She is happy, calm and content - and I don't really notice when she is "on" anymore. I can only recommend Easy Mare for anybody whose mareâ€™s seasons are a struggle - it really works.

I just wanted you to know how successful your EQUILIBRIUM GOLD ( Easy Mare Gold) had been for my four y.o. Connemara mare. She was often hyper and silly, especially when in season which spoilt her chances in the Show ring . A shame as she is very pretty. But she has turned over a new leaf after being on Equilibrium for some weeks and is behaving very well to date while being broken in. I am SO pleased! Thank you.

My Dales mare had become increasingly "mareish". She was trying to kill me, and she did put me out of action for 3 weeks with a savage kick. I sadly decided to ask my instructor to try to sell her for me, but to be open about her behavioural problem. Sleepless nights followed and then as a last resort I tried Hilton Herbs Equilibrium Gold ( Easy Mare Gold) I had previously tried mare products from Equine America, Global herbs and NAF none of which had the slightest effect. After 3 weeks on Equilibrium ( Easy MareGold) I noticed a change for the better and after 6 weeks she had stopped all the nasty behaviour and was kind and affectionate. She was happy to be groomed EVERYWHERE and no longer lashed out when saddled. This was over a year ago and she has been lovely ever since. I keep her on Equilibrium Gold ( Easy Mare Gold) all the time and it seems a small price to pay for a happy mare. Nov 2011: It is getting on for 2 years since I wrote the above. My mare is still on a small amount of Equilibrium Gold every day and she is a joy to handle now. I am thinking of weaning her off it over the course of 2012 to see if the lovely behaviour continues. Watch this space - I will report again

To Support the Nervous System 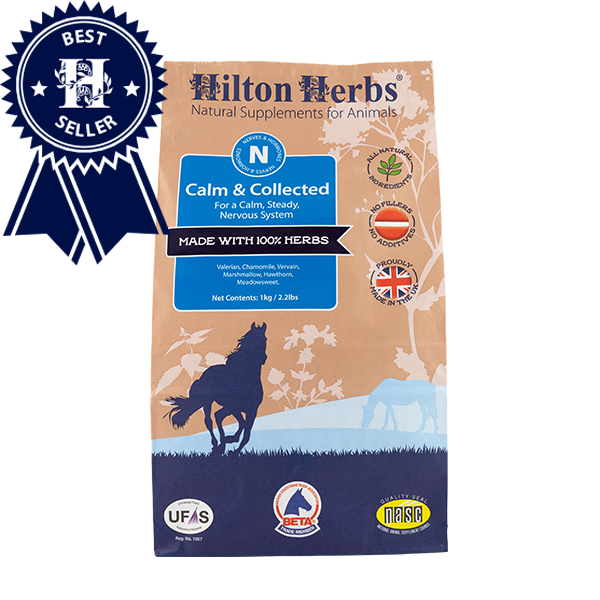 To Support the Nervous System